Posted by Hugo Rep Posted on March 27, 2018 with No comments

Although the name indicates that it should be round, the roscón de reyes generally has an oval shape due to the need to make cakes larger than 30 cm (12 inches) across for larger parties.

Recipes vary from country to country. For decoration, figs, quinces, cherries or dried and candied fruits are used.

It is traditionally eaten on January 6, during the celebration of the Día de Reyes (literally "Kings' Day"), which commemorates the arrival of the three Magi or Wise Men. In most of Spain, Spanish America, and sometimes, Hispanic communities in the United States, this is the day when children traditionally get presents, which are attributed to the Three Wise Men (and not Santa Claus or Father Christmas). In Spain before children go to bed, they leave a dish filled with biscuits and a few glasses of water for the three wise men and the camels they ride on.

The baby Jesus hidden in the bread represents the flight of the Holy Family, fleeing from King Herod's Massacre of the Innocents. Whoever finds the baby Jesus figurine is blessed and must take the figurine to the nearest church on February 2 (Candlemas Day, Día de la Candelaria). In the Mexican culture, this person has the responsibility of hosting a dinner and providing tamales and atole to the guests. In U.S. communities with large Mexican and Mexican-American populations, such as Los Angeles, San Diego, San Jose, Dallas and Chicago, the celebration includes the Mexican hominy stew pozole, which is made for all one's neighbors. 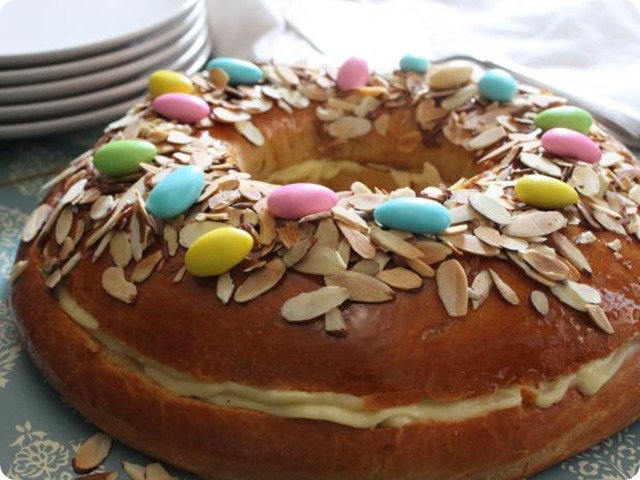 Prepare the dough. Combine the milk, sugar and yeast in the bowl of a stand mixer. Let it stand until it begins to foam, about 10 minutes.

Using the paddle attachment, add the eggs, rum, salt, vanilla, cinnamon, orange zest and lemon zest to the yeast mixture, and stir at low speed until well incorporated, 1 to 2 minutes.

Add the flour, 1 cup at a time, alternating with the butter, until both are well incorporated, about 3 to 5 minutes. Increase the speed to medium and continue to beat until the dough begins to pull away from sides of the bowl, about 8 to 10 minutes. The dough will be smooth but still sticky. Pour the dough into an oiled bowl and cover with lightly oiled plastic wrap. Place in a warm, draft-free place. Allow the dough to rise until it doubles in bulk, about 1 to 1 1/2 hours. Refrigerate the dough until well chilled, at least 4 hours or overnight.

Prepare the pastry cream. Combine the water and sugar in a saucepan, and bring to a boil. Simmer over medium heat until it thickens slightly and registers 200 degrees F on a candy thermometer, about 5 to 10 minutes. Set aside to cool.

Combine the milk, egg yolks, cornstarch and salt in a mixing bowl, and whisk until the mixture is well combined and there are no visible yolks. Pass the milk mixture through a fine-mesh sieve into a separate 3- to 4-quart saucepan. Whisk in the cooled syrup and cook over medium-low heat, stirring constantly with a wooden spoon, until it thickens and coats the back of the spoon, 25 to 30 minutes. Remove the saucepan from the heat and stir in the vanilla. It will continue to thicken as it cools. If not using immediately, cover the surface of the cream with parchment paper and refrigerate until chilled, up to 2 days.

Preheat the oven to 350 degrees F. Line a large baking sheet with a nonstick liner or parchment paper.

Turn the dough out onto a lightly floured surface. Roll the dough into a large log shape, then join the ends to create a ring with a hole in the middle. Place a large cookie cutter in the center to maintain the opening while it bakes. Transfer to the prepared baking sheet. Allow to rest until doubled in volume, about 1 1/2 hours.

Brush the dough with the egg wash. Place in the preheated oven. Bake until golden brown, about 35 to 40 minutes. Remove the bread from the oven and cool on a wire rack.

Prepare the glaze. Combine sugar and water in a small saucepan, and bring to a steady simmer for about 5 minutes. Stir in the orange juice. Remove from heat and allow to cool.