The most read articles in Argentina Photo Gallery during 2018.

The unfathomable mysteries of Patragonia with its lakes and glaciers of supernatural beauty and its endless steppes, the main popular festivals in Argentina among which the colorful Corrientes Carnival stands out, Argentine birds in danger of extinction, the main National Parks many they are Unesco World Heritage Sites and the secrets that Buenos Aires, the metropolis par excellence, reveals to us around every corner.

Top 10 Most Popular Blog Posts Of 2018 on The Argentina Photo Gallery. 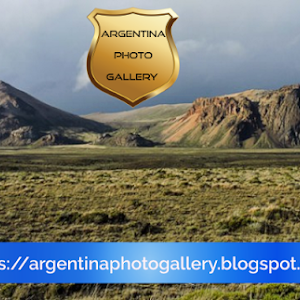 THE PATAGONIAN STEPPE IS A MYSTICAL JOURNEY INTO THE PAST, FULL OF STORIES, MEMORIES AND MYSTERY.

The wind that sweeps an endless space. Where the train tracks meet, the sun falls on the horizon, with the silence of the afternoon. The p... 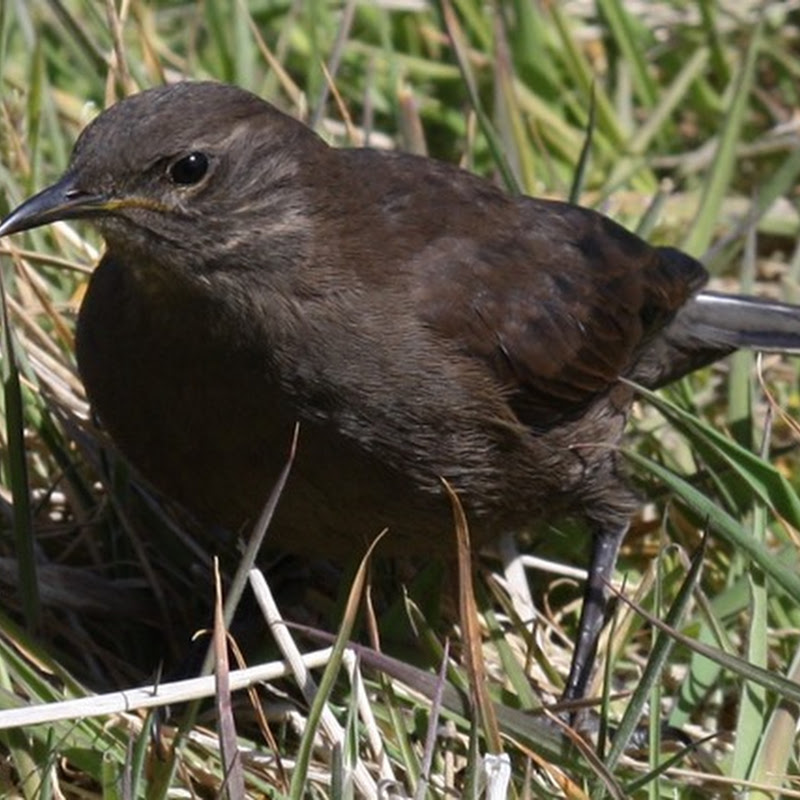 BIRDS OF ARGENTINA OF STABLE OR ACCIDENTAL PRESENCE IN DANGER: THE BLACK REMOLINERA.

Until recently, the Black Remolinera (Cinclodes antarcticus) was considered as a species that inhabited the Falkland Islands, Tierra del Fu... 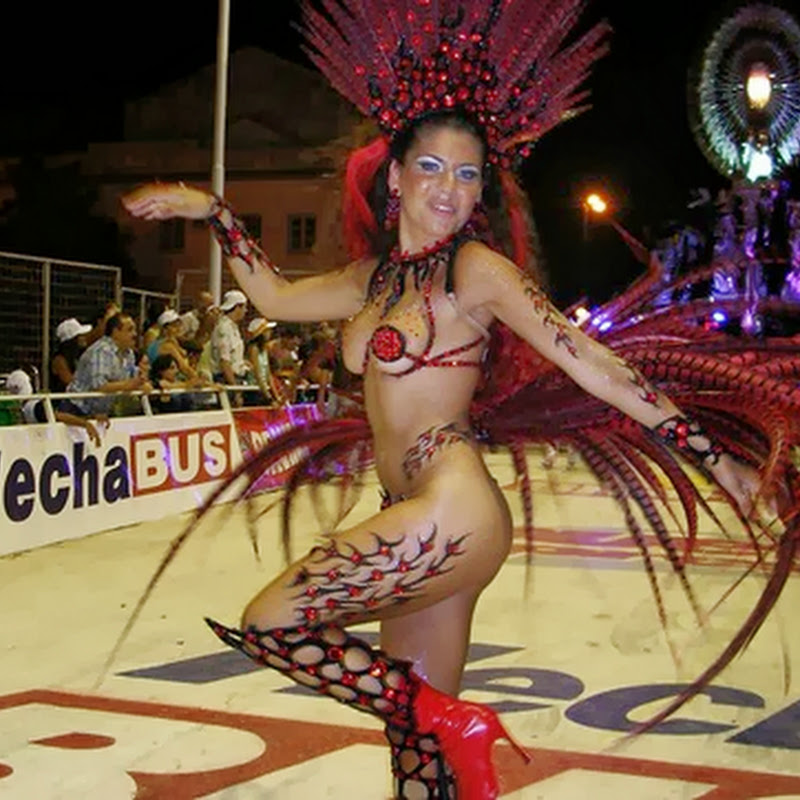 GUALEGUAYCHÚ CARNIVAL THE CARNIVAL OF THE COUNTRY.

As in previous years, during the next 2014 Summer months, on Saturdays (from January 4th to March 1st, and this Summer will also include Mar... 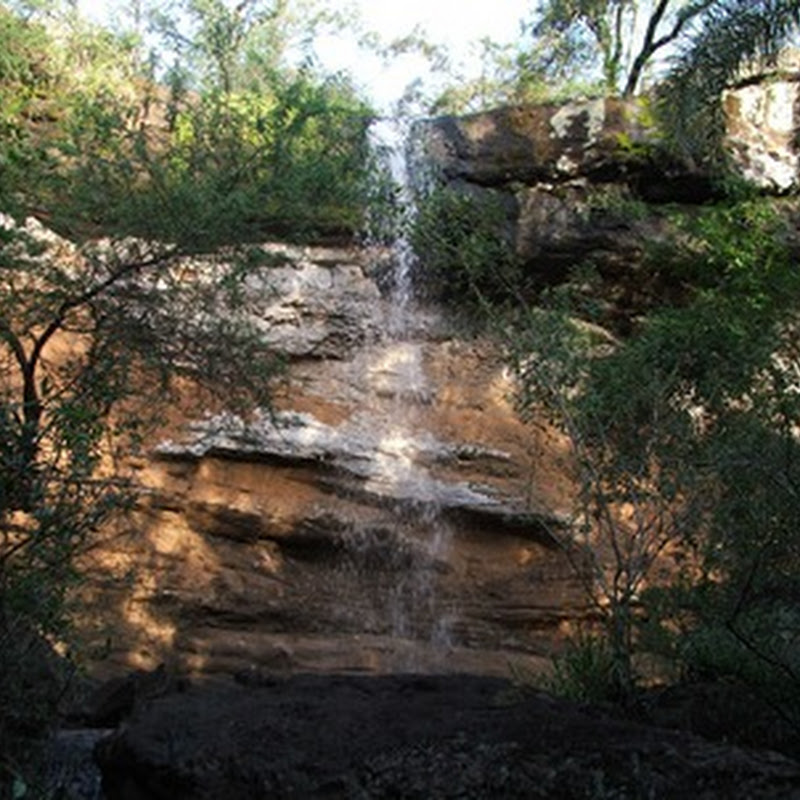 THE "CAÑADÓN DE PROFUNDIDAD" PROVINCIAL PARK AND THE CAPTIVATING ATMOSPHERE OF THE JUNGLES OF URUNDAY.

The "Cañadón de Profundidad", located about 30 kilometers from the capital of the province of Misiones, the city of Posadas, P... 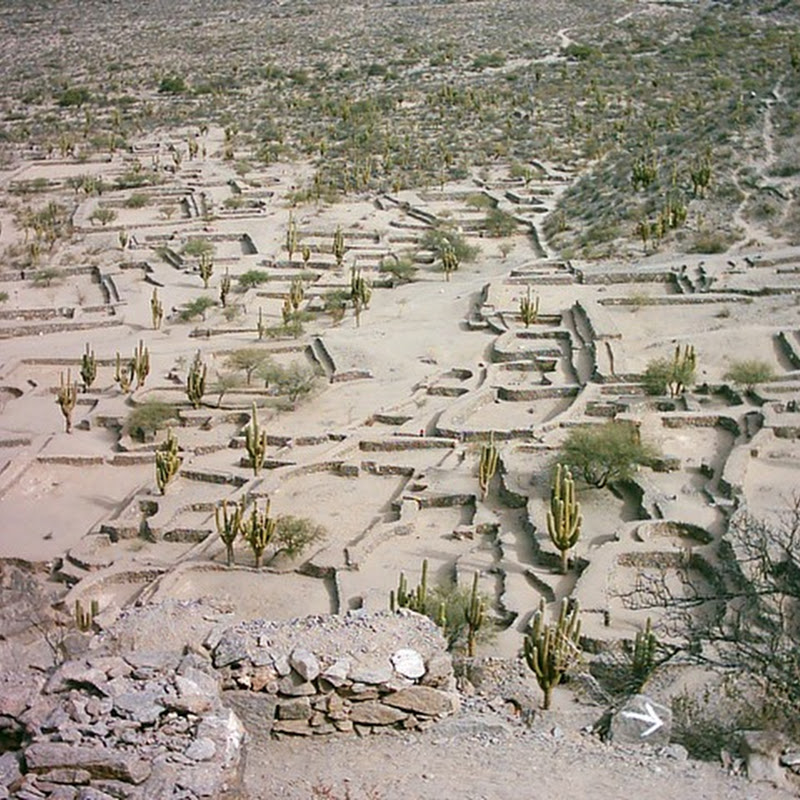 THE RUINS OF QUILMES ARE A TRUE CULTURAL HERITAGE OF INDIGENOUS CULTURE.

The ruins of Quilmes can be reached from Cafayate (Salta) or from Tafi del Valle (Tucumán). This location is just stunning, unique and ma...

THE LIHUE CALEL NATURE RESERVE IS AN AUTHENTIC OASIS THAT HOLDS MANY SURPRISES IN TERMS OF FAUNA.

Lihué Calel means ‘mountain range of life’ in the Araucano tongue and it is the name of the mountain range system located in the center-sout... 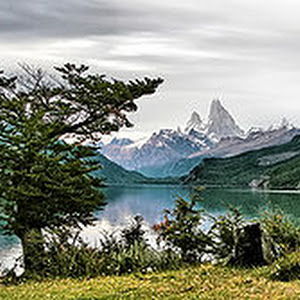 ARGENTINEAN PATAGONIA IS WIND SWEPT SCRUB, WITH HUGE ROCK TOWERS AND GLACIERS THAT FALL MAJESTICALLY INTO THE HUGE LAKES THAT DRAIN THE WINTER SNOWS.

Argentine Patagonia is for the most part a region of steppelike plains, rising in a succession of 13 abrupt terraces about 100 metres (330 f... 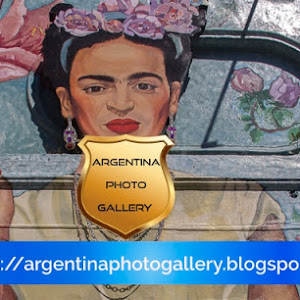 Buenos Aires is renowned for its vibrant street art culture, with both Fodor's and the Huffington Post listing it as one of the top cit... 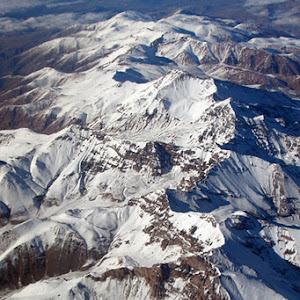 THE ANDES MOUNTAIN RANGE SHOWS ITS BEAUTY IN THE PATAGONIAN PROVINCES.

The Andes mountain range shows its beauty in the Patagonian provinces. Millennial silent forests with native vegetable species are extended ... 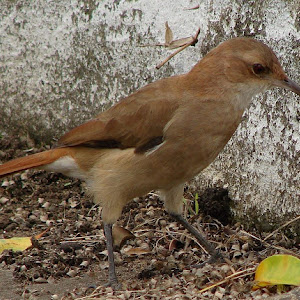 BIRDS OF ARGENTINA BY ALEC EARNSHAW.

The avifauna of Argentina include a total of 1026 species, of which 19 are endemic, 7 have been introduced by humans, and 70 are rare or ac...
Etichette: Ancient Ruins, Art, Biodiversity, Birds, Endangered Species, Fauna, Flora, Food and Cooking
Until recently, the Black Remolinera (Cinclodes antarcticus) was considered as a species that inhabited the Falkland Islands, Tierra del Fuego and adjacent Argentine islands, Cape Horn and Fuegian islands of Chile, with two distinct subspecies. 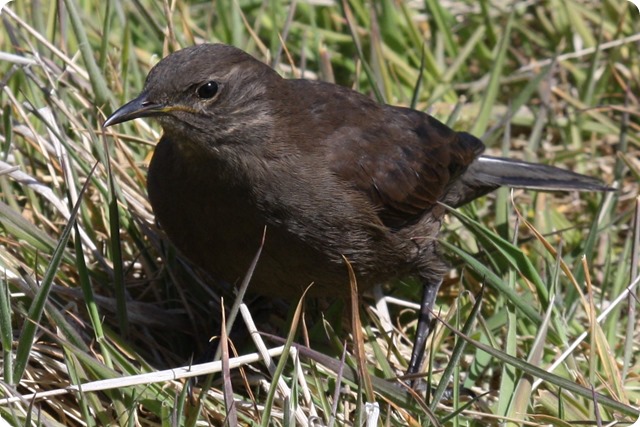 The black remolinera is between 18 and 23 cm long. In both sexes the plumage is predominantly dark brown. Your throat is slightly lighter with some cream specks. It has a tenuous superciliary list and a diffuse reddish band on its wings. Its beak is quite long, robust and slightly curved downwards with a yellow point at its base (which does not appear in the Malvinas variety).

Practically nothing is known about the reproduction of the Black Remolinera.
It is assumed that most aspects of the life of this species are presumably similar to those of the Malvinera Remolinera. 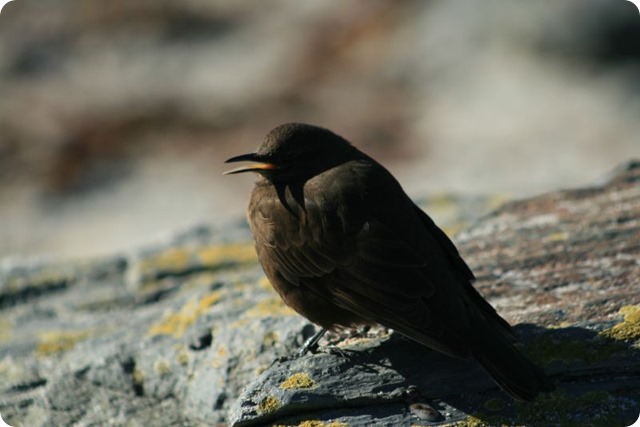 In Rio Grande, Tierra del Fuego and Chile reproduce in inaccessible places and deep cracks of the rocky coast.

Its diet consists mainly of small invertebrates but also consumes regurgitated fish that gets in the colonies of seabirds, some waste from the surroundings of human settlements and bits of carrion. It usually searches for its food among the algae washed up to the coast and the edge of the waters. 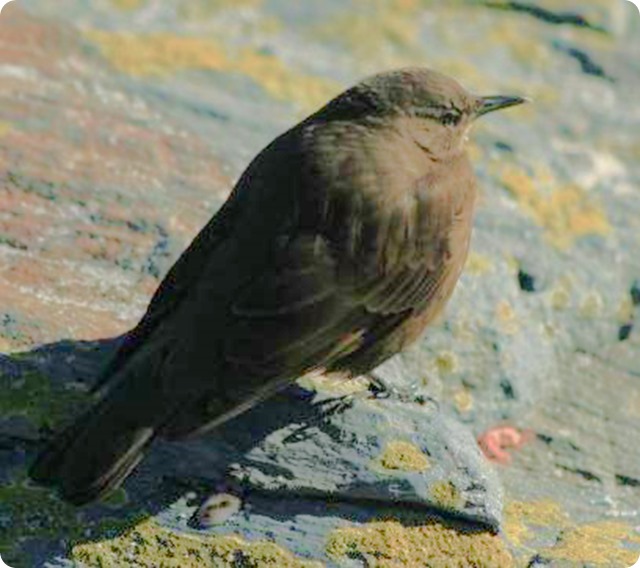 At present, the Black Whirlpool (C. maculirostris) is considered a separate species of Malvinera Remolinera (C. antarcticus) for deferring in its blackest coloration, lack of rufo on the wing, yellow base of the beak, shorter beak and tail longer, being this monotypic and inhabiting rocky coasts, especially in the vicinity of colonies of mammals and seabirds.

Birds of Argentina of stable or accidental presence in danger: the Black Remolinera.Click to Tweet

The adult of the nominate race has uniformly dark sooty brown plumage, except the slightly paler throat and some dull rufous on bases of flight feathers.

The bill is blackish. The eyes are dark brown. Legs and feet are blackish.

Both sexes are similar and the juvenile resembles adults. 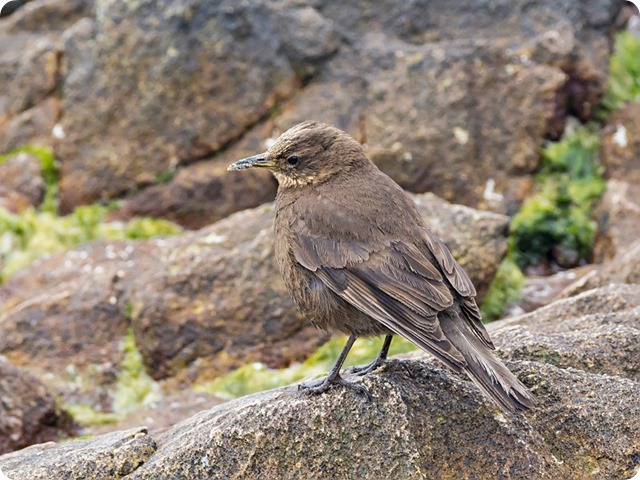 Behaviour in the wild.

The Blackish Cinclodes feeds mainly on invertebrates such as arthropods, marine invertebrates, Diptera and their larvae, and Orthoptera.

This species is more omnivorous in Falklands were it forages among the floating rotting kelps or in tussac grass. It feeds on cracked eggs of Spheniscidae, and also takes regurgitated food and excreta from seals and seabirds.


Read also: The Lihue Calel Nature Reserve is an authentic oasis that holds many surprises in terms of fauna.

It forages alone or in pairs, gleaning food on beaches. It probes in kelp debris to reach invertebrates. It may leap upwards to catch flies from the air. 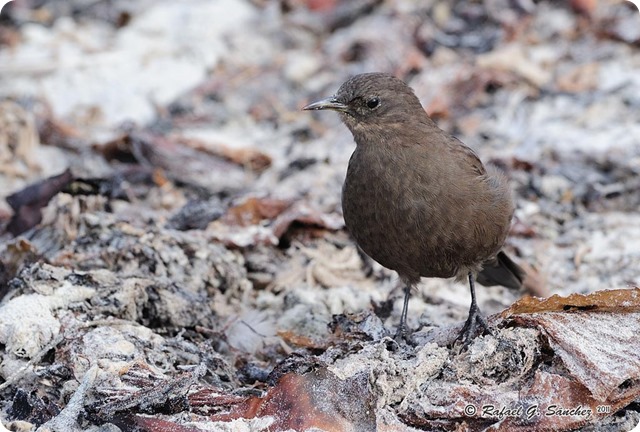 The breeding season takes place during the austral spring/summer.

In Falkland Islands, eggs are recorded in October, and a second brood may occur in December.
The Blackish Cinclodes nests in tunnel in a bank facing the sea, or in hole or rock crevice in rocky coasts, in boulders or old building, a hole in a log, an old burrow abandoned by other bird species, or under dense vegetation.

The nest is at the end of the tunnel. The nest-chamber is lined with dried grass, root fibres and feathers. Other materials can be added through the nesting period.

The female lays 2-3 eggs and the incubation lasts two weeks. The chicks are fed by both parents and fledge about 25 days after hatching.

This species can produce two broods per season. 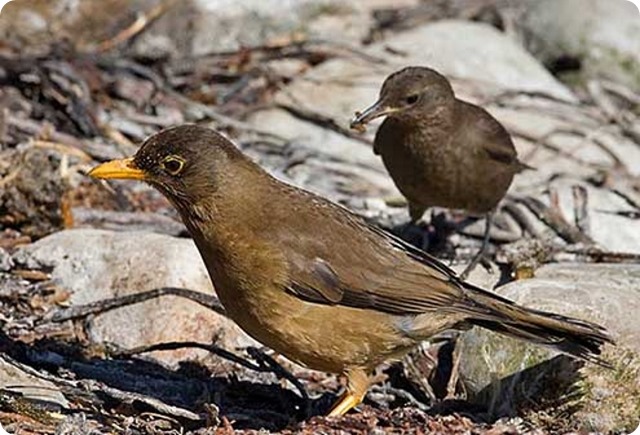