Posted by Hugo Rep Posted on March 27, 2018 with No comments

Since 1882, Sacred Hearts & St. Stephen Church, the oldest Italian church in Brooklyn, holds a Good Friday procession that rounds the corner of my apartment.  I know it’s a block away when I hear the distant strains of music over police sirens.  The neighborhood has changed so much that I wondered if it could really be the same as I headed down the stairs.

There were still a good number of young families at the start, the neon read cross was still the same, and the church officials in ceremonial dress were still trying to keep everyone moving.  Like every year, the rear of the procession was held by two rows of women, all in black.

Carrying candles, they escort a life-size statue of Our Lady of Sorrows and repeat the rosary in Italian.  While the earlier phase is lead by slow beating drums, these women are always accompanied by an aria.  It brings tears to my eyes every year.

It only last a few minutes, then they disappear down the street.  It was a relief to see how little had changed, but I couldn’t help but notice that fewer people had stepped out of their brownstones to watch them pass. 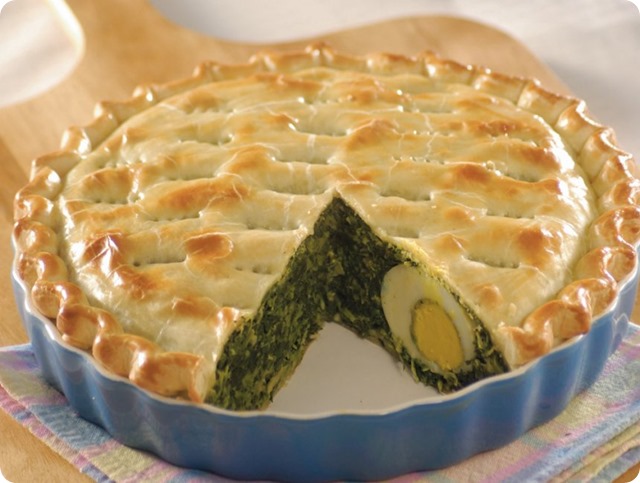 Though I hadn’t made the connection earlier, it was the perfect setting to serve my own very Italian Easter pie by way of Argentina and Uruguay.  Brought to South America by Genoese immigrants, the eggs in the tart symbolize rebirth and according to Francis Mallmann should have 33 layers of pastry in honor of the 33 years Jesus lived.  Already missing the music, I found Italian opera to play in the background while we ate and caught up.  It was lovely but not the same without the rosary chorus.  Felices Pascuas!

Tarta Pascualina
Adapted from Seven Fires: Grilling the Argentine Way by Francis Mallmann.  This is one of my favorite cookbooks, but I gravitate towards the recipes that don’t involve building a pit of fire – out of necessity only.  In his version of the pascualina, he substituted empanada dough for the 33-layers of pastry but I used puff pastry instead.  I also wanted the pie to have a little more depth, so I baked it inside an oven-proof cast iron skillet.  A tart ring or springform pan should work as well.  I’d recently found an Argentinian Parm which is creamier than the Italian and less expensive that worked well but other recipes called for spinach and a combination of cheeses like ricotta and mozzarella.

For the decoration, I used the trimmings from the pastry to make leaping rabbits and flowers.  As Aaron helped me decorate, I had to admit to owning not one but two bunny cookie cutters.  Though it’s traditional at Easter, this is a great make ahead brunch tart.

In a large skillet, heat 2 tablespoons of butter and olive oil over medium-low heat.  Add the onions and garlic and sauté until golden, 15-20 minutes.  Set aside.

Trim the ends of the swiss chard and rinse thoroughly.  Separate the leaves from the stems reserving both.  Roughly chop the stems.  Prepare a large bowl of ice water and set aside.

Bring a large pot of salted water to a steady boil.  Blanch the chopped stems in the boiling water until tender, 2-3 minutes.  Remove the stems with a skimmer or slotted spoon and chill in the ice water.  Drain in a colander and set aside.  Return pot of water to a boil and blanch the leaves until just wilted, about 1 minute.  Remove and chill in the ice water.  Combine the stems and leaves and drain both well.  Remove excess water with paper towels as needed.  Roughly chop and set aside.

Combine the chopped swiss chard and onions in a large mixing bowl.  Stir in 4 eggs, one a time until well blended.  Stir in 1 cup of the shredded Parmesan.  Season with salt, pepper, nutmeg and red pepper flakes to taste.  Set aside.

Preheat the oven to 400 degrees.  Grease a cast iron skillet (or 8-inch springform pan) with remaining tablespoon of butter and set aside.

Prepare the pastry.  Roll out one sheet of puff pastry to a 12-inch circle about 1/8 inch thick on a lightly floured surface.  Fit the pastry into the prepared pan, letting the excess drape over the pan.  Brush the pastry with olive oil.  Spoon the filling into the pan and smooth the top.  Create four round wells in the filling.  Carefully drop one egg in each well.  Cover with remaining 1 1/2 cups of cheese.

Roll out remaining sheet of pastry and place on top of the pie.  Trim edges and pleat to design.  Using a sharp knife, cut tiny vents in the top of the pie.  The trimmings can be cut out or shaped for decorations.  Lightly brush with beaten egg.

Bake in the oven until it is puffed and golden brown, 35-40 minutes.  Allow to cool inside the pan.  Let cool to room temperature before serving.