The 10 Most Popular Posts on Argentina Photo Gallery in March 2013.

Posted by Hugo Rep Posted on April 17, 2013 with No comments
1.- The Andes mountain range shows its beauty in the Patagonian provinces.

The Andes mountain range shows its beauty in the Patagonian provinces. Millennial silent forests with native vegetable species are extended along the shores of glistening waters.
On top of the mountains, nature overflows with granite peaks and ice fields spreading their glacier tongues into lakes of unsurpassable beauty.
Imposing mammals and sea birds, half-way between real life and fantasy, spend certain seasons on the rough coasts of Patagonia where they complete part of their life cycle. Seals colonies play on the islets and sandbanks.
The world’s most important southern elephant seal continental colony is located in Peninsula Valdés.
Every year, southern right whales come to Nuevo and San José gulfs to breed.

2.-The nine sites of memory.

From now until Tuesday, the Human Rights Secretariat ran signaled spaces where detention and torture during the dictatorship, in Buenos Aires, Córdoba, Santa Fe, San Juan, and Mendoza Misiones.
The Federal Network of Sites of Memory signaled from today until next Tuesday nine former clandestine detention centers in the provinces of Buenos Aires, Córdoba, Santa Fe, Mission, San Juan and Mendoza. Coordinated by the National Archive of Memory (ANM) and under the aegis of the Ministry of Human Rights of the Nation, the network reported that the signs "include information on the operation of each site under the repressive system and expressed in the public space of the democratic state committed to publicize and condemn these heinous acts, so they never happen again. "

3.- Cartoon (Comic) in Argentina: Patoruzú, one of the great milestones rioplatense humor. 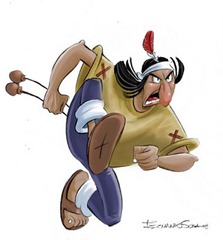 Patoruzú, created by Dante Quinterno in 1928, is one of the most important and influential cartoon Argentina.
Born as a secondary character in two short-lived comic strip, the chief Patoruzú-the last of the tehuelches, which the Spanish conquerors had seen at the time as giants endowed with prodigious strength-soon got his own comic, which would origin to the early sixties, one of the great landmarks of humor in Argentina.
Quinterno drew original stories intermittently for nearly forty years, and reprints were numerous. From the 40s and 50s of the twentieth century became one of the icons of popular culture Argentina.
The identity of Patoruzú underwent several alterations in the early years.

4.- Nahuel Huapi National Park is the oldest Argentine national park, in Patagonia in the foothills of the Andes mountains.

Nahuel Huapi National Park is the oldest Argentine national park, in Patagonia in the foothills of the Andes mountains. It was established in 1934, but the nucleus of the park is the land donated to the federal government by Perito Moreno in 1903.
The park covers approximately 7050 km² and is located in the southwest of the Neuquén and northwest of the Río Negro provinces bordering with Chile. The largest city within the park and a base for tourism is the city of San Carlos de Bariloche. Villa La Angostura is another lakeside resort also within the boundaries of the park.

The Giant Armadillo (Priodontes maximus), colloquially Tatou, Ocarro, Tatu-canastra or Tatú Carreta, is the largest living species of armadillo.
It was once found widely throughout the tropical forests of eastern South America and now ranges throughout varied habitat as far south as northern Argentina.
This species is considered vulnerable to extinction.
These armadillos typically weigh around 28 kilograms (62 lb) when fully grown, but a 32 kilograms (71 lb) specimen has been weighed in the wild. A typical length is 89 cm (35 in), of which a third to two-fifths is likely to be accounted for by the tail.