Paleontology for Neuquen is a subject of scientific and cultural attraction.

Posted by Hugo Rep Posted on March 24, 2013 with No comments 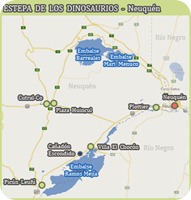 Paleontology for the territory of the province has in recent years become a topic of scientific and cultural attraction which itself is of interest to the tourist who comes to the area.

The main findings are the remains of Giganotosaurus carolinii, its name means "giant southern lizard", which was discovered in 1993 and is so far considered the largest carnivorous dinosaur of all time, even

In Huincul, Carmen Funes Municipal Museum, located at the entrance of the city, is characterized by the renewal of their showrooms and is known for the development of scientific research.

The most important discovery on display in the museum is the huinculensis Argentinosaurus, the largest herbivorous dinosaur in the world belonging to the group of sauropods, and family Titanosauridae Its name means "reptile from Argentina Huincul". This specimen was found in 1988, 8 km east of the city of Plaza Huincul.